Today is the longest day of the year in the Southern Hemisphere, also called the Summer Solstice. The word solstice comes from the Latin "sol" - "Sun" and "sistere" - "to stand still" and it's the time of the year when the position of the Sun (in the sky) reaches it's Northernmost extreme. It's the time of the year when we get the most daylight. Of course we cannot and we MUST NOT LOOK AT THE SUN in the sky WITHOUT PROTECTION. But like the ancient people, we can observe it without problems at sunrise and at sunset.

If we use the same observation point (like our deck for instance) we could make a note of the place where the Sun rises every day. Ok, maybe not every day but once a week. We will see that as the season changes, the Sun will also change it's rising and setting point sideways, little by little, along the horizon. It will do that until it will reach the northernmost point and then it will start going back, journeying towards the southernmost point - just like a pendulum. It's been doing this for about 4.5 billion years but of course we only started to notice it only about 11,000 years ago.

Here is a great collage taken by Anthony Ayiomamitis in Greece. He took one picture of sunrise at the Winter Solstice, one at the Equinox and one at the Summer Solstice. You can see there is a significant change in the position where the Sun rises, depending on the season.

At Solstice, the Sun appears to rise from the same spot and it takes a few days until it becomes obvious that it started it's journey back (along the horizon). This is the reason that Christmas is celebrated a few days later (and not on the day of the solstice) because it took ancient people a few days to be able to tell that the longest night of the year was gone. They were able to do that by observing the place where the Sun was rising and setting. 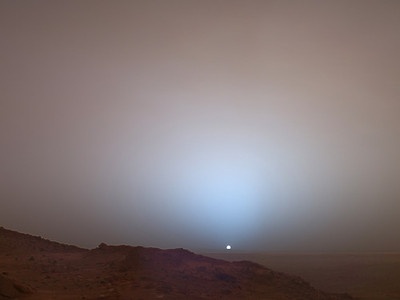 We know it because Spirit acquired this view of the Martian sunset from Gusev Crater on April 23, 2005. Using data from images such as this, scientists have learned that twilight on Mars is longer than on Earth, lasting for up to two hours before sunrise or after sunset. Dust high in the atmosphere scatters light to the night side of the planet. Similar twilights are seen on Earth following major volcanic eruptions.
Image Credit:NASA/JPL-Caltech/Cornell/Texas A&M

Of course, the real question is:

"How would it feel to watch the Sun rising above the Martian horizon, at solstice, from the deck of your Martian bach?"

To this question, a group of scientists and space enthusiasts led by Dr. Robert Zubrin (see the book "The Case for Mars") is trying to answer from here, from Earth. They are inspiring us to dream that one day, humankind will be there on Mars to admire the Solstice sunrise. Or sunset. Or just admire the courage and dedication backed up by science that made us take off to the stars.

Doctor Zubrin and the Mars Society setup a Mars Analogue Research Station here on Earth in the Utah Desert, and they give the chance each year to selected crews to experiment and study towards human colonisation of Mars. Here is what they have to say about this experience:

"The Mars Society has identified three prime goals to be met by the Mars Analog Research Station Project:

Mars Analog Research Stations will be operated by Mars Society researchers and will be made available to NASA and selected scientists, engineers and other professionals from a variety of institutions worldwide to support science investigations and exploration research at Mars analog sites.
Indeed, with so much at stake, Mars is a test for us. It asks us if we intend to continue to be a society of pioneers, people who dare great things to open untrodden paths for the future. It puts us to the question of whether we will be people whose deeds are celebrated in newspapers, or in museums; whether we will continue to open new possibilities for our descendants, or whether we will become less than those who took on the unknown to give everything we have to us. Mars is the great challenge of our time." 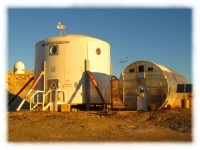 Looking forward to seeing you from there!
Clear Skies,